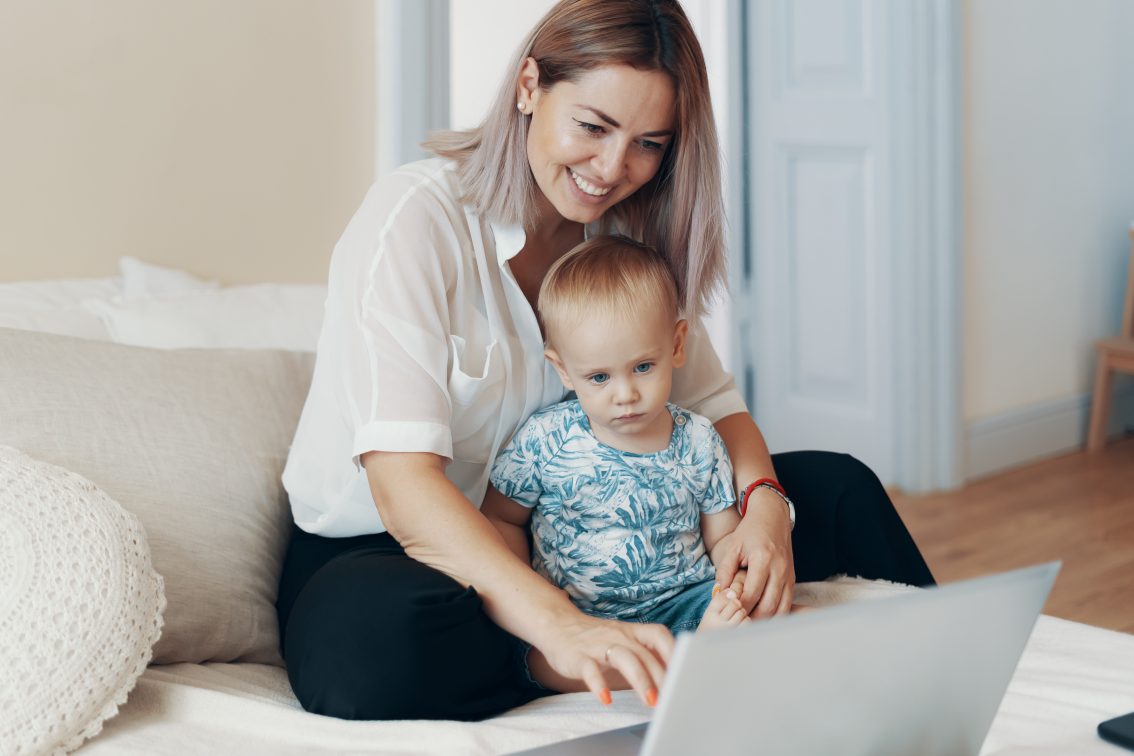 After returning from abroad, one of them encountered a harsh Slovak reality and had problems finding a flexible job during and after her maternity leave. The other, from the environment of a Slovak startup, gained an opposite experience. Terézia Miháliková and Patrícia Hirschnerová decided to help women return to work after maternity leave. They founded the Working Moms initiative, in which they seek mutually beneficial solutions for women and their employers.

In this interview, you will learn:

What are the most common problems that working mothers encounter in Slovakia?

P: A woman is often perceived from two perspectives. Either she is a mother or an employee, and it seems like nothing in between the two exists. Only a few view a woman with little children as an expert, many see only that she is a mother. The problem is that working conditions in many companies are not set up in a way which allows women to realise their potential professionally without having to compromise their family priorities.

T: There is also very little flexibility in working hours. Many understand this as a part-time job or home office. But sometimes, it is enough to give a woman flexibility in not having to start at nine and finish at five o‘clock. It should be perfectly fine for her to leave work earlier to pick up the children from kindergarten or school and do the rest of the work later.

You have established the Working Moms initiative, which helps companies set optimal working conditions for employees with little children. It also helps women returning to work after a career break. Why did you decide to do this?

T: During my maternity leave, I lived abroad for several years, where the “if you want, you can” approach worked. I did not expect at all that it would be a problem to find a flexible job in Slovakia. I became interested in this issue. Why is it a problem at all? Why can it be completely common somewhere but not in our country?

P: My case was the opposite. I had a very good job, which I really enjoyed. I knew that if one day I said I was pregnant and went on maternity leave, there would be no problem with that. The company operated based on the principle that it always looks for a way that guarantees satisfaction to both parties. I was shocked that it doesn’t work that way in every company.

For women who work during or after maternity leave, returning to work can be very difficult. Many face prejudices from employers. What are the most common stereotypes they have to face?

P: Employers often consider women returning to work after maternity leave only from the short term perspective. They think that things could be complicated with them, e.g. that they will often need to leave to take care of a sick child or they will not deliver tasks on time due to the family situation. I understand that it is difficult to look at things from a long-term perspective, but all the numbers show us that doing so is a good strategy. The moment I start perceiving a candidate for a position as a professional who can enrich the work team, I, as an employer, would prefer to find a way to help her meet her needs than thinking about how many absences she may have at work.

T: Fear of reduced performance is also a common prejudice. Employers fear that work will not be as important for a woman as it used to be. Paradoxically, the opposite is true. If a woman is given the opportunity and the conditions so that she does not need to compromise between her family and working life, she is very happy to invest time, skills and expertise in this role.

Terézia and Patrícia established the Working Moms initiative, through which they look for mutually beneficial solutions for women and their employers.

Conversely, why is it beneficial for companies to employ working mothers?

P: Working mothers are often overlooked as a source of skilled labour. For some positions today, it is very difficult to find a qualified person full time. Nevertheless, few HR managers realise that they may cooperate with someone from their team who is currently on maternity leave and who would be able to get involved in the process very quickly, at least part-time. Experience of many companies shows that diverse teams are more efficient. After her maternity leave, a woman can bring something very specific to the team, which may move it much further.

T: I would also like to emphasise loyalty. When a working mother has a job in which she can realise her potential and at the same time, be allowed to meet the needs of her family, she will appreciate it very much and she will try to do her job as best she can.

Do you plan to open the debate on working fathers in the future, too? If companies also showed support to working fathers, who would not have to compromise between work and family, it would ultimately help women as well, because they could share childcare.

T: Those topics are partially interconnected. Primarily, we have focused on the topic of working mothers, because in Slovakia, it is women who are often disadvantaged on the labour market because of motherhood. In this context, we have aimed our activities mainly at women-mothers. In some ways, however, our activities also affect fathers. Once there are more pro-family measures in companies and more flexibility in working hours, fathers will be able to use them, too. Ultimately, this will have an impact on women and, thus, on families.

Surveys say that 86% of working mothers change employers if they have an offer from someone who is more respectful of their family needs. What do these women expect from their employers?

P: It is much simpler than many companies think. Feeling that I have a place to go back to and that being a mother is fine, often means much more than Christmas parties and gifts for children. It is not a question of money, but approach.

Do women who are mothers have a different approach to work, for example, compared to women without children?

T: I would not like to generalise, but these things cannot be learned from books. These are skills that women gain through experience during maternity leave. We can call it seniority in decision-making. Of all the things that cannot be done during the day, a woman can intuitively decide what is the most urgent and what can be postponed. This applies not only to housework or childcare but also to work processes. Working mothers may also foresee some things and approach them with peace, they do not decide with emotions.

P: I would also add efficiency. Mom values her time very much, so she tries to do the job extremely efficiently. To put it bluntly, most mothers don’t have time to sit in the kitchen with a cup of coffee. They need the job to be done because, in the afternoon, they already have other, family-related commitments.

After maternity leave, a woman can bring something very specific to the team, which can move the team much further.

Is it important that women gradually prepare for their return to work during maternity leave?

T: Of course. Through our initiative, we also try to encourage women not to take maternity as something that stops their careers, but as an opportunity for self-realisation and reflection on their future direction. In addition to maternity leave, a woman can work as a volunteer, for example, and present everything she has learned during that period to her employer once she returns to work. It immediately affects the self-confidence of the woman. Suddenly, it is a matter of communication between two equal partners, not an employer and a mother.

P: Besides, the online environment offers women on maternity leave so many opportunities that it is sometimes difficult to find their way around. When cooking, for example, she can listen to a podcast on a topic that interests her. Later, when she comes to a job interview, it can help her significantly in self-presentation. The employer, thus, sees that the woman develops. She knows what is going on, she learns. This is not about hours of work, but rather about a conscious decision.

What can Slovakia learn from other countries in this field?

T: Recently, a so-called returnship has been very popular. It is a senior internship for women who have been on maternity leave for several years and who had at least three years of experience in their field before a career break. It is a paid internship through which a woman also gets mentoring, but at the same time, she is no longer considered a junior. Hence, she is considered valuable for the company from the beginning. During three to six months, she trains to work at the position and so she has an opportunity to remind herself of everything she once knew.

Another great idea is the so-called job sharing, which means that a company can employ two people in one job. The employer does not interfere in this relationship. The company does not need to coordinate the two in any way. It all depends on their mutual agreement. They are fully substitutable, so there is no need for compensation or representation. Although job sharing in Slovakia has been possible with the Labour Code since 2011, it is a rarity in Slovak companies.

P: Further, the question is what works successfully abroad and is also applicable in Slovakia, given our legislation. Abroad, companies are usually equipped with breastfeeding corners for their employees. In Slovakia, however, the legislation allows you to be at home with your child for three years, so women do not require such facilities.

When talking about maternity and later parental leave, do you think three years is a good solution? Or should we take the example from abroad, where it is common for women to return to work after three to six months?

P: Looking back, the generation of our parents had a maximum of six months of maternity leave. The generous legislation we have today is a double-edged sword. On the one hand, it creates a luxury that a woman can use. On the other hand, it creates expectations that a woman should stay at home for the whole three years, and people often do not understand why she would want to go back to work. However, the important thing is that no matter what the woman decides, the company has many opportunities to allow her to apply her expertise, whether it is after six months or three years.

This interview is part of the Good Mondays campaign, which the Pontis Foundation is currently implementing in cooperation with the Slovak National Centre for Human Rights. The campaign draws attention to the problem of discrimination in the workplace and calls for breaking down prejudices and stereotypes on the part of colleagues, superiors and employers.

More information is available at www.zapeknepondelky.sk.