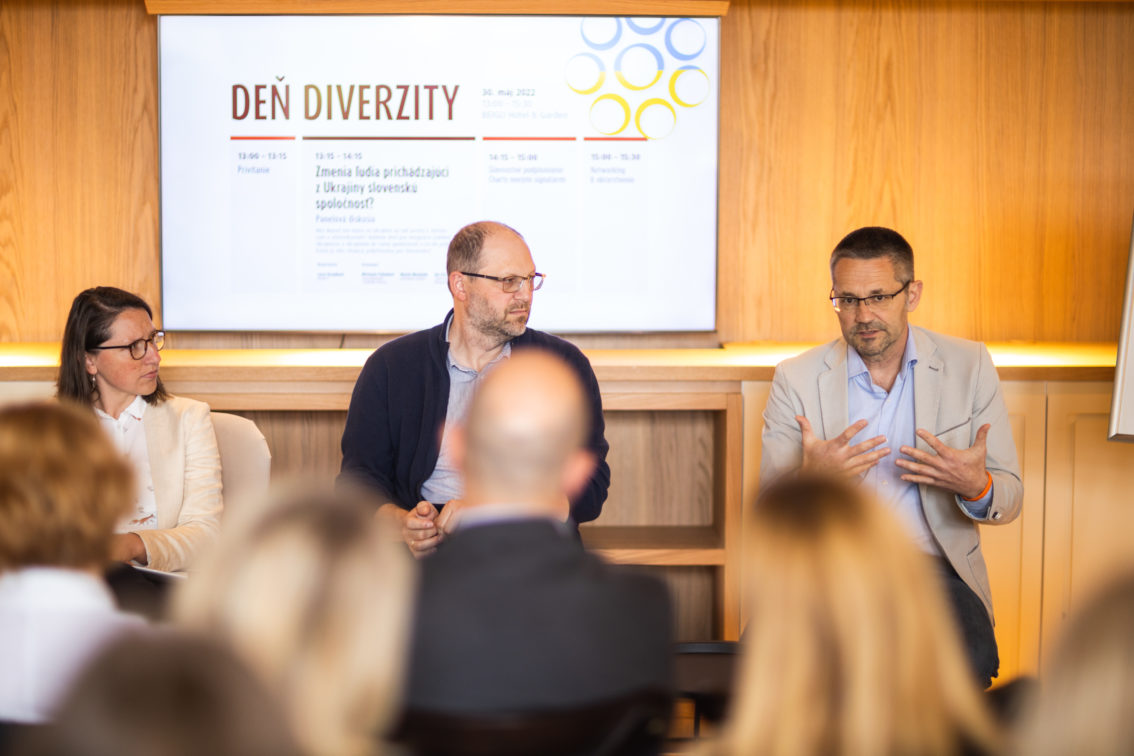 The Day of Diversity was dedicated to the inclusion of people coming from Ukraine. Another ten signatories have committed to promoting diversity.

What impact does the war in Ukraine have on our attitude towards refugees? Are we doing enough to integrate (not only) Ukrainians into our society and the labour market? Why is this situation an opportunity for Slovakia? We addressed these issues in a panel discussion on the occasion of the Day of Diversity, which we celebrated in Slovakia on the 30th of May for the fifth time now. On this day, another ten signatories joined the Diversity Charter. Among them were companies, organisations and institutions which voluntarily committed to create a diverse and respectful environment for their employees.

The guests of the panel discussion were the following:

After three months since the start of the war in Ukraine, the situation at the border is relatively calm now. According to M. Pobudová, about 3,000 Ukrainians come to Slovakia every day. Shortly after the invasion and at the beginning of March, this number was around 16,000. Besides, many families have been returning to Ukraine in recent weeks. “The high number of incoming refugees has, so far, been addressed mainly by crisis management, providing mostly the most basic needs. Now, it is time for the state to say what to do next with people who want to stay in Slovakia for a long time,” said J. Orlovský. He thinks that the integration of foreigners has never been more important. For comparison: in almost 30 years of independence, a total of 160,000 foreigners came to Slovakia and stayed to live here. As a result of the war, we welcomed 75,000 people in just three months. Many of them often do not even have their basic needs met.

M. Macharik provided accommodation in Banská Štiavnica to about a hundred Ukrainians. He created an integration centre on the premises of the Scout House, where he now helps the refugees to adapt to the new environment. “We have no problem with them. The Ukrainians are very similar to us Slovaks.” At the same time, however, he expressed concerns about how the state would take care of the refugees in the coming months. Many leases expire at the end of June. Hotels and guesthouses have booked stays for the summer, so it is not in their power to provide people from Ukraine with accommodation. Dormitories could be a solution here.

“Currently, there is no integration programme set by the state, which would have an impact on the local level and offer methodological instructions and guidelines on how to implement the integration,” said M. Pobudová. She thinks this is true not only for detainees from Ukraine but also for migrants who come from countries outside the European Union. For them, the International Organization for Migration (IOM), based in Bratislava and Košice, provides services from public sources. However, it provides services only to those who actively seek them out. Among these services are social counselling, language courses or financial subsidies for a retraining course. According to statistics, only a small proportion of eligible people receive such assistance.

“A large number of refugees in such a short time have shown us all the problems in the field of integration under the magnifying glass, and we can see that they concern the whole of Slovakia,” said J. Orlovský. He believes that the state will use this momentum to set up high-quality integration services in sufficient quantities, which will be available at the local level, with allocated financial resources.

Even though the majority of the population does not perceive Ukrainians negatively because they are very similar to us, M. Pobudová points out that this does not necessarily mean acceptance of other foreigners, for example, those from third countries. According to surveys, the most effective tool for changing attitudes towards otherness is direct contact. “The state and local governments should keep this in mind when setting their policies. They should create integration tools to enable positive interaction between the people who come to Slovakia and those who live here,” she emphasised. It is especially important to support communities, organise courses and trainings, and create an informal meeting space.

According to statistics, Slovakia is one of the countries with the smallest share of foreigners. They make up 3.07% of our population. The average in the European Union is around 8%. “We must prepare for the migratory pressure that will be here even after the end of the war, especially as a result of the climate crisis,” said J. Orlovský, adding that it is necessary to work more with data and create effective integration tools.

Refugees from Ukraine can be a benefit to our society

People from Ukraine can also help us significantly in the labour market. The Labour, Social Affairs and Family Office registered almost 80,000 job vacancies in February this year, a large number of which are difficult to fill with domestic workers. This problem will be even more pronounced in the future. “People from Ukraine who are university-educated, skilled, but now work in gastronomy or administrative services, where they do not use their potential, come to us. Many of them only need short-term assistance to be able to do the work they have done in the past, for example, language training,” said M. Pobudová.

However, Mr Macharik pointed out that not all people coming from Ukraine could work. Most of them are mothers with children who do not have the conditions to work, because it is difficult to place Ukrainian children in kindergartens or primary schools. In many cases, they are also traumatised, so the mothers need to stay home with the children. Employers can also help in this situation. “Find them accommodation, teach them Slovak and provide them with support in the field of child care. It’s easy. They do not need anything more,” he said. There is also a need for flexible working hours, retraining courses and language training. “Thanks to a few supporting steps, we can really use the potential of the people who come here, which will ultimately benefit our society,” added M. Pobudová.

The Diversity Charter has 120 signatories now

The event also included the admission of new signatories. Ten companies, organisations and institutions ceremoniously signed the Diversity Charter and committed to create a diverse and respectful environment for their employees. After five years of its operation, the Charter already has 120 signatories from various sectors and areas of business.

The following have joined the Diversity Charter Slovakia: 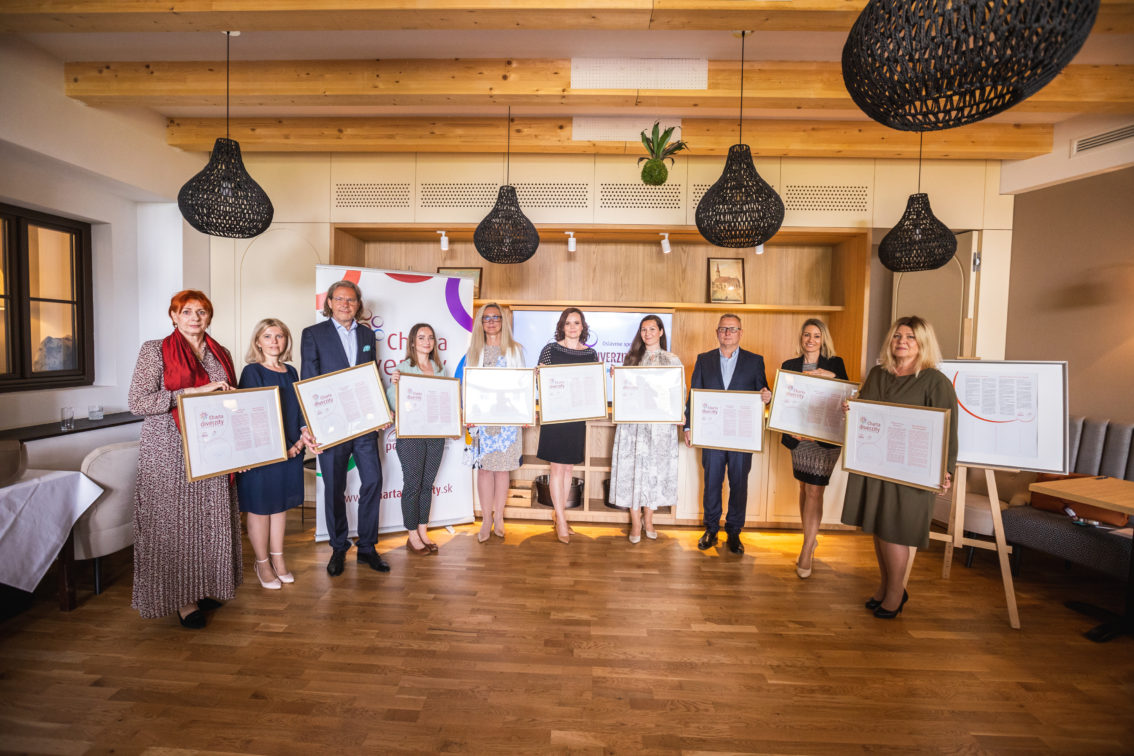 Another ten companies, organisations and institutions have committed to promoting diversity and inclusion in the workplace.